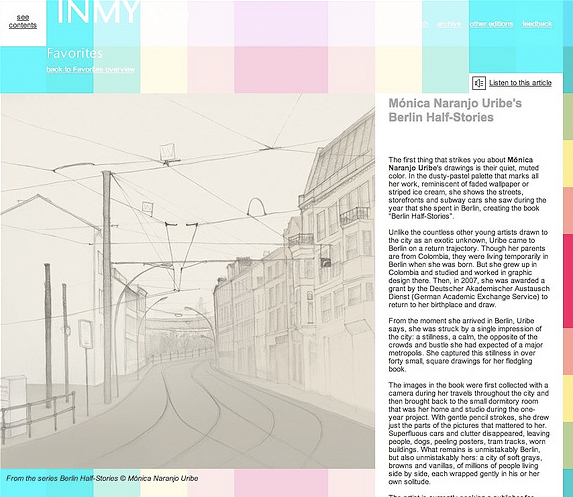 The first thing that strikes you about the Berlin in Mónica Naranjo Uribe‘s drawings is the quiet, muted color. In the dusty-pastel palette that marks all her work, reminiscent of faded wallpaper or striped ice cream, she shows the streets, storefronts and subway cars she saw during the year that she spent in this city, creating the book Berlin Half-Stories.

Unlike the countless other young artists drawn to the city as an exotic unknown, Uribe came to Berlin in a kind of return. Though her parents are from Colombia, they were living in Berlin temporarily when she was born. But she grew up in Colombia, studied and worked in graphic design there. Then, in 2007, she was awarded a grant by the DAAD to return to her birthplace and draw.

From the moment she arrived in Berlin, Uribe says, she was struck by a singular impression of the city: a stillness, a calm, the opposite of the crowds and bustle she had expected of a major metropole. She captured this stillness in over forty small, square drawings in her fledgling book.

The images in the book were first collected with a camera during her travels through the city and brought back to the small dormitory room that was her home and studio during the one-year project. With gentle pencil strokes, she drew just the parts of the pictures that mattered to her. Superfluous cars and clutter disappeared, leaving people, dogs, peeling posters, tram tracks, worn buildings. What remains is unmistakably Berlin, but also unmistakably hers: a city of soft grays, browns and vanillas, of millions of people living side by side, each wrapped gently in his own solitude.